Improve your game through your mind

How many of us who have played the game for a long time can recall the feelings we had when we played our first round? This feeling is the beginning of the GPA™, game scoring and improvement system. Golfers Playing Average or GPA™ creates a level field for golfers at all levels to develop confidence in their games. In case you have forgotten how those early rounds felt – here is a little reminder: 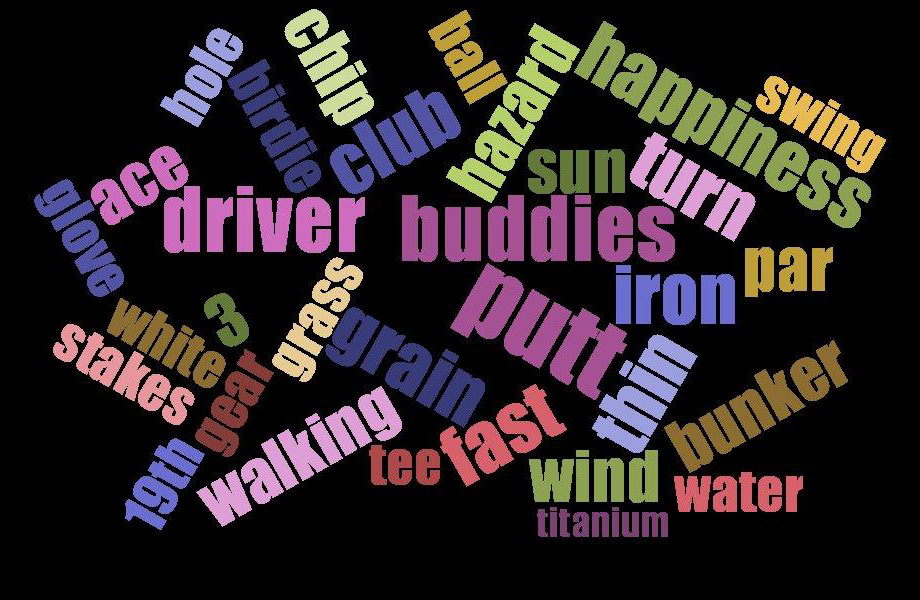 And that’s just a small sample.

As we have seen golf is a game of confidence. A deficit of confidence equates to frustration on the golf course. And who wants to spend time and money simply to walk away frustrated? This is a core reason why golf does not attract or retain more people. 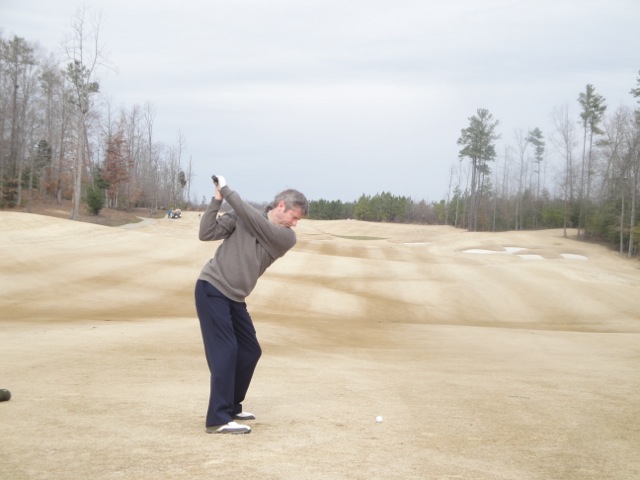 Golf is a game of confidence

Golf instruction for a golfer is enhanced when confidence is maximized

GPA™ harmonizes all past learning experiences and golf scoring becomes consistent and familiar. No longer will the card be a source of frustration as the golfer measures themselves against themselves vs. the score on the card in relation to par.

There is a different way…

How is knowledge managed in the academic world – a learning environment where we have great familiarity?

We are all familiar with the scoring / grading system which produces a grade point average. As we know par is a score which is developed by the designer of a course to suggest the most efficient way to get from the tee (Point A) and the bottom of the hole (Point B). A short hole will be a par 3. Generally expected to mean one shot to the green and two putts. This equates to par. Of course one can be shy of the green and chip and then one putt and the score is the same. For a par four? Generally it is two shots to the green and two putts to maximizing efficiency from Point A to point B. A par five generally allows for three shots from Point A and then then two shots to complete Point B.

If we take the academic grading system above and then apply it to the notion of par – meaning this: if maximum accomplishment in an academic course results in an A grade; then the golf equivalent is an A for par.

In Sports: The number of golf strokes considered necessary to complete a hole or course in expert play. 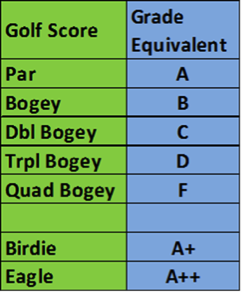 What do you think? By drawing a direct parallel between the system of knowledge management we all grew up with and applying it to golf scoring we can then move away from the limiting nature of the scorecard and then move to the arena of learning – becoming a better golfer using a familiar system.

At present I am a Level 2 golfer. Note I am not discussing handicaps. Right now in general I am scoring under 90. Occasionally I will break 80. An essential degree of comfort with your level is essential to make the golf experience one which builds confidence and assures: “Happiness – One Shot at a Time…”™

Once you have determined your level – 1 thru 4 – we then look at the scorecard differently. Moving from Golf Equivalency in the first chart to GPA™ in the next chart.

The above charts reflects scoring and grade equivalents for a level 1 player. As mentioned I am a level 2 player and you may be the same or level 3 or 4. So… you may be asking… how do I get an A? Recall the playing level and look below.

Bringing all of the elements together, the chart below will illustrate the GPA™ Scoring system. For the Level 1 or Sub 80 scorer on this particular day they shot an 80 on a Par 72 course. Pretty good I’d say. Quite a few A’s and B’s on the card as well. Converting the letter grades to the numerical equivalents we see the golfer played to a 3.5 out of 4.0 GPA™. If you recall your days as a student and came home with a report card showing a 3.5 cumulative grade point average – you might feel pretty good about yourself. I know I would!

Now say that your playing companion was a Level 3 player, someone who shoots between 90 and 100 frequently. Perhaps a good friend, spouse or perhaps a curious child. You have shot a very nice score of 80, as in the above and they have shot 92. We know in the game of golf a lower score is the better score. We also know that the game has a long learning curve. In this case, looking below, you will note that the Level 3 player despite shooting a higher score had a better GPA™ for the round. Meaning? They may have played closer to the very best they good given the level they play at in this present moment.

Imagine the conversation between the two golfers on their way home or enjoying a meal. The Level 1 player feeling good about their game. The Level 3 player both in relative and comparable terms feeling good about their game. The scorecard leveled. Both golfers gathering a sense of how they did on this day against their ability vs. the arbitrary notion of par. This builds encouragement. Confidence. Happiness….One Shot at a Time.™

If you use the GPA™ for three to six months you will likely see a one level improvement. Golfers who have used the system have seen their scores drop from the 120’s to breaking 100. Some golfers have seen their scores drift from high 80’s to lo 80’s. The quest for an “A” becomes ingrained and the resulting satisfaction from achieving an “A” creates residual confidence which results in better scoring.

For the golfer this is a path to Happiness…One shot at a Time.™

"The worst club in my bag is my brain."
- Chris Perry

"Concentration comes out of a combination of confidence and hunger."
- Arnold Palmer

Become Sensei-tized: Understand that the degree of trust a golfer has before they take the shot is a strong predictor of success. Learn more about GolfSensei13's TQ™ Trust Quotient here

"You must work very hard to become a natural golfer."
- Gary Player

"Every golfer scores better when he learns his capabilities."
- Tommy Armour

No longer will the card be a source of frustration as the golfer measures themselves against themselves vs. the score on the card in relation to par.

"Every golfer scores better when he learns his capabilities."

"Golf is not, and never has been, a fair game."
- Jack Nicklaus

If maximum accomplishment in an academic course results in an A grade; then the golf equivalent is an A for par.

"Hitting the ball is the fun part of it, but the fewer times you hit the ball the more fun you have." - Lou Graham

Guest Speaker - weaving insights from golf and lessons of life

Private Lessons physical or virtual
One on One Life Coaching