Case Study B: Mom and Son

Amy is a single mom who has a son Julian. Julian is a very good athlete and is very active in sports as well as outdoors activities with ATV’s. Amy wants to do something with Julian but she is not a candidate for riding ATV’s. Amy is a golfer. And Julian has expressed interest in playing golf. He has grown up in the Tiger Woods era of golf. Because of Tiger and other golfers like Rickie Fowler, Bubba Watson, Rory McIlroy and Jonny Vegas; Julian has enthusiastically taken on the desire to learn to play golf. Amy was delighted!

Amy had familiarity with the GPA™ scoring system. She was introduced to it a couple of years back as she was developing her game by a friend. Before their first round together Amy sat down with Julian and explained the GPA™ system to him. They sat down together and went through the materials found on www.golfsensei13.com. Amy explained how important it was for Julian to have a high TQ™ before every shot and by doing such he would likely make a good shot. Amy printed off a GPA™ scorecard along with the TQ™ scale and off they went. 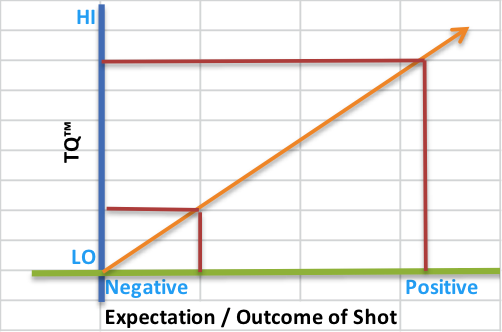 Julian’s athleticism was obvious from the first tee. Through playing video golf he was familiar with the rules, the general principles of the game and had developed a swing. Amy had worked diligently on her game and was playing at a Level 3. Julian believed that he was a Level 1, not surprising for a teenager, but Amy knew he’d likely be playing at a Level 4. Pretty soon Amy’s selection was proven out as Julian hit some good shots to get close to the green on the first hole but struggled with putting. He noted that the video game didn’t help him with putting so much!

Initially Julian was disappointed. Yet Amy, using the GPA™ scoring system, showed Julian that despite his stroke score he made a “B” on the hole. Julian immediately understood that a “B” was a good grade and his disappointment quickly faded to calm as he went to the next hole. He experienced immediate gratification vs. frustration.

Partway through their round of nine holes Julian lost focus and concentration. His shots became less than athletic. The course was relatively quiet and Amy took out the TQ™ scale and asked Julian to score himself on the various elements of the scale. His score was low. Amy asked him to focus on the elements to a stronger degree before he hit the next shot. Julian, using techniques he learned in other sports, closed his eyes and visualized the elements found on the TQ™ scale. Once confident, he stepped up and hit his next shot. It was a strong 7 iron over water to an uphill green. Amy and Julian fist bumped. 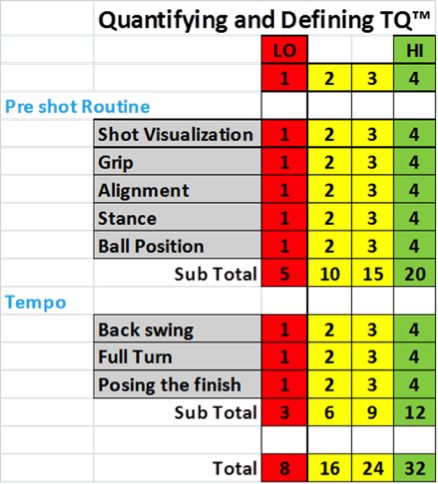